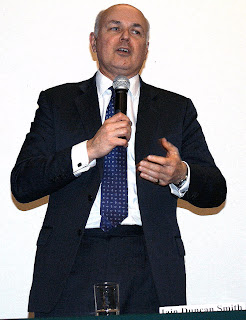 Props to Wikipedia of course, for the picture
Another sign that incompetence, graft and downright greed are no barrier to political success as we watch the latest disgraceful goings-on in Westminster over the Welfare Reform Bill. Almost as bad as the fact that people seem to be sucking this shit up and boosting the bloody Coalition. FFS!!

“We know who these families are,” said Iain Duncan Smith on the Today programme. “We have been identifying them, and will be working with them to ensure that the impact of these changes are managed in the best possible way.”


It's all very Kafka-esque. How have the Department for Work and Pensions managed to pull off this amazing feat? What does it actually mean? Perhaps they will find these families among the ‘homeless’ who are sharing rooms in Major Smith’s (‘Duncan’ is not a family name, and so he is not double-barrelled. It is just one of his given names, and typical of the kind of twat he is that he goes around using it) fantasy world. A world which is not inhabited by such organisations as Shelter, who surprisingly have a somewhat different take on the definition of homeless. As far as I can see, with Clegg et al running around peddling the usual mendacious nastiness since the Lords and bishops bared their teeth again, the government will offer training programmes to – wait for it – help get people into work (!) as a sweetener once they have lost their homes and have finished queuing up at the soup kitchen for the kids’ dinners.

He then went on to pronounce that poor people should not have large families if they cannot afford to. As a Catholic, with a stated desire to promote conventional (married) family life, perhaps he would like to suggest an appropriate way for these families to do as he suggests? I believe that (unless a man is diagnosed with HIV, of course, when the use of perforated condoms may be considered, though of course this may not be entirely successful in limiting the size of the family) there could be some dispensation for the rhythm method among the mandarins in the Vatican City. Failing that, a sterilisation programme could be implemented. It almost worked in the Third Reich after all.

Maybe his educational background at the GEC Marconi employees’ college gives him an insight his Eton/Oxbridge colleagues so sorely lack. Or, being married to the daughter of a baron (though Baroness Betsy was of course handsomely paid for 'working' as his diary secretary) and with four children of his own to which he can leave his considerable fortune, he is uniquely qualified to preach on poverty and responsible family planning. Or possibly, he's just a fucking cunt.
Posted by Myeral at 12:44

This is a Flickr badge showing items in a set called Window on the world. Make your own badge here.